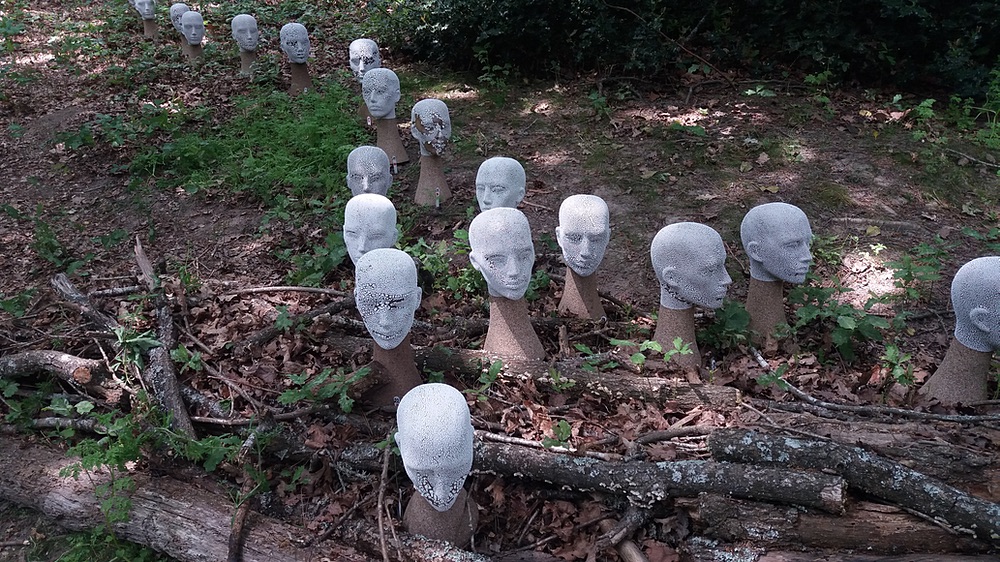 It is a ceramic piece comprising 40 beautifully-crafted faces placed in the ground. But they are not placed simply, but through the forest floor in a sequence. Who are these people? Are they refugeees? Any which way, it’s an impressive line-up, which it will be broken up after the event. We must all enjoy the piece as a whole here and now.

Trent Hiles ‘Labour of Life’ (The Art of Work) 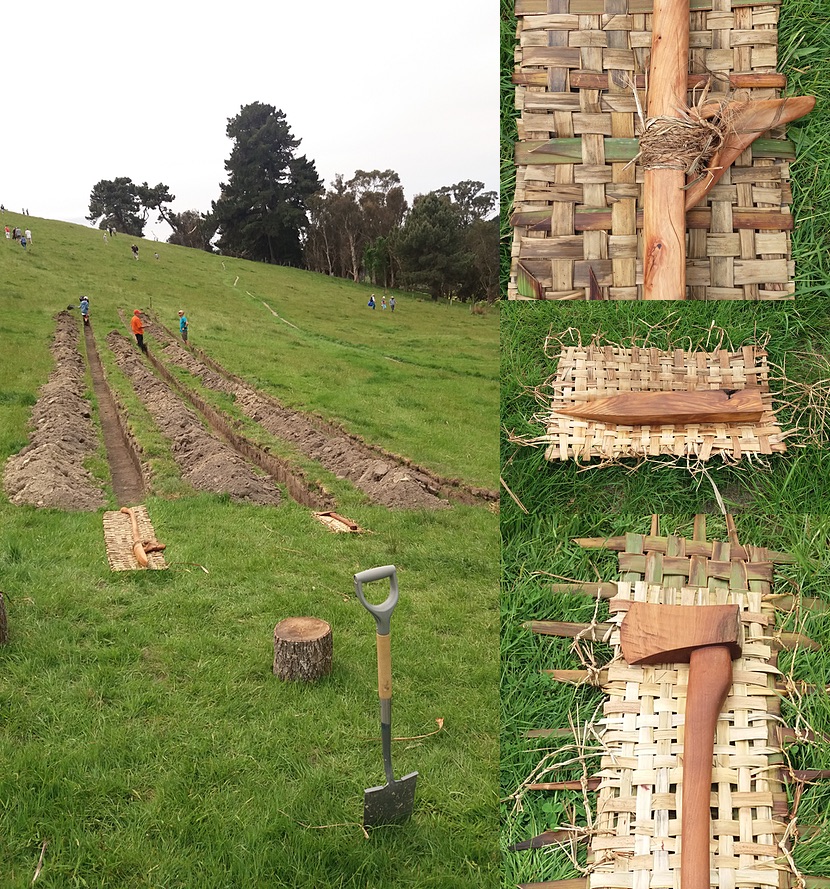 Trent has made this on site with others able to join the artist digging the burial place for his carved wooden pieces, wrapped in woven flax. It’s intellectually rigorous and probably a bit baffling, but I liked its links to American land art, as well as the traditions of the tangata whenua. Once again this is a work which, apart from documentation, can only be seen here and during the weekend when it’s completed.

These are not sculptural works on a plinth. They’re not made for a corporate office foyer… we encounter them, but then the experience remains only in our collective memory. 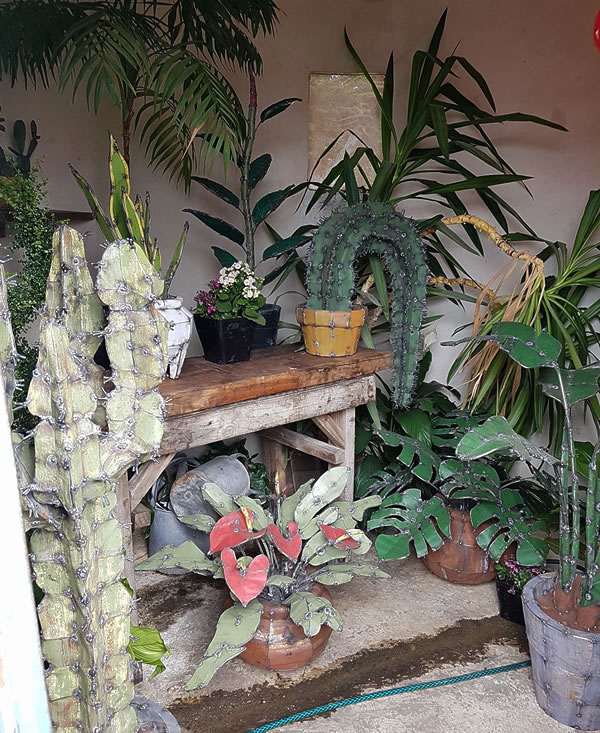 Visiting the Sculpture on the Peninsula exhibition is an experience like no other. More than 100 works by experience and emerging artists from around New Zealand have been thoughtfully installed at Loudon, an historic working farm, and seeing them all leads you around the homestead garden, through shady woodlands, into old stables and hen houses and up a grassy ridgeline that offers dazzling views of Lyttelton Harbour/Whakaraupo.

The works vary greatly in scale and form — from delicate glass and sinuously carved stone to constructions sculpted from harakeke, rusted wire , paper and even rubber bands. Many artists have responded specifically to the unusual setting, incorporating references to farming life, the geography of Banks Peninsula, and even the birds that inhabit the garden and farmland.

One of the great pleasures of coming back to Loudon every two years is seeing the practices of returning artists develop as they continue to explore the possibilities of the location. The work I have chosen, an installation of hothouse plants by Hannah Kidd in the old killing shed is an example of this. Opening the door instantly transports you to, unexpected world — one that is not only delicately welded metal cacti, lilies, and carnivorous plants, but radiates with tropical heat and rings of birdsong. It is an evocative and unsettling multi-sensory work that demonstrates the artists considerable skill and also shows how technique. materials and concept can combine to create an unforgettable experience for the viewer.

Sculpture on the Peninsula Award $10,000

Sponsor: The 2015 award was sponsored by Swinard Wooden Floors, in memory of the late Geoff Swinard, whose vision began this event.

Sculpture on the Peninsula is a terrific event on the national arts calendar, and unique in its setting on a historic working farm. You encounter sculptures in unexpected places: in greenhouses, wood piles, old sheds, and fields; up on ridgelines, or nestled under trees. Walking around and discovering the work is half the fun.

There are many strong works included this year among a field of nearly 200 individual sculptures—and it’s always a pleasure to be able to see the huge diversity of creative talent on show. Some works refer to the farm setting or the dramatic landscape of Lyttelton Harbour; others address political issues; and several reveal the artist's mischievous sense of humour. The overall quality of making and construction was particularly high in 2015. In the end Aaron te Rangiao’s installation of ten beautifully carved patu took the top award. Ten Green Bottles is a work with great elegance and verve, produced with considerable technical skill as well as a strong conceptual dimension. It has a compelling presence in the old stable block. Ten Green Bottles draws on Māori histories and cultural forms, constructing an imaginative encounter with the past in the present. It’s a work that I found myself thinking about long after I’d left Loudon Farm on the drive around the harbour back to the city. 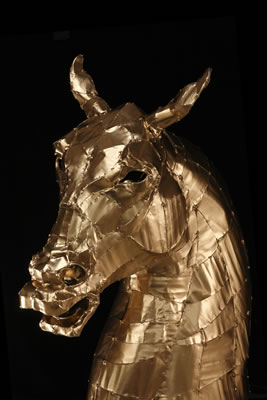 Sculpture on the Peninsula Award $10,000

An Award of $10,000 was made for artistic excellence at Sculpture on the Peninsula 2013. The award was judged by Lara Strongman. 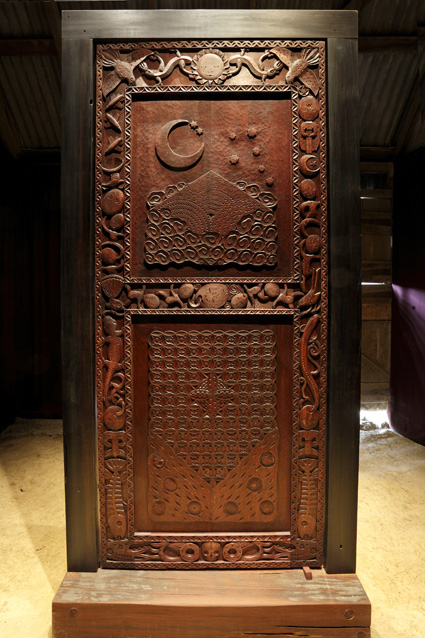 ‘The Red and Black Portal from the Marae at Otuwhero’, Tim Wraight

What makes Sculpture on the Peninsula unique is its unique setting on a historic, working farm in the dramatic landscape of Lyttleton harbour. Sculptures by prominent New Zealand artists are installed in surprising places: in old sheds, in fields, up macrocarpa trees, tumbling out of an ancient chook house. Discovering the work is half the fun.

Choosing this year’s winner was a difficult proposition; there’s a great diversity of mediums, scale and approaches to sculpture among more than 170 works included in the exhibition. In the end Tim Wraight’s work, The Red and Black Portal from the Marae at Otuwhero, distinguishes itself from a strong field. This is a work of great presence and subtlety; an imaginative act, which balances extraordinary craftsmanship with bold intellectual enquiry. The Red and Black Portal repays close looking, but ultimately retains a sense of mystery and inscrutability. Tim’s great-grandfather was the Banks Peninsula carver JH Menzies, whose work remains a little known national treasure and I admire the way that with this work Tim has harnessed the traditional skill of wood carving to address contemporary questions about place and identity.

An award of $1500 sponsored by the Loons Circus Theatre Company.

The award was a tie between ‘Stop the Clock’ collection by Jane Downes and ‘Laid’ by Eggs et al .

Sculpture on the Peninsula Award 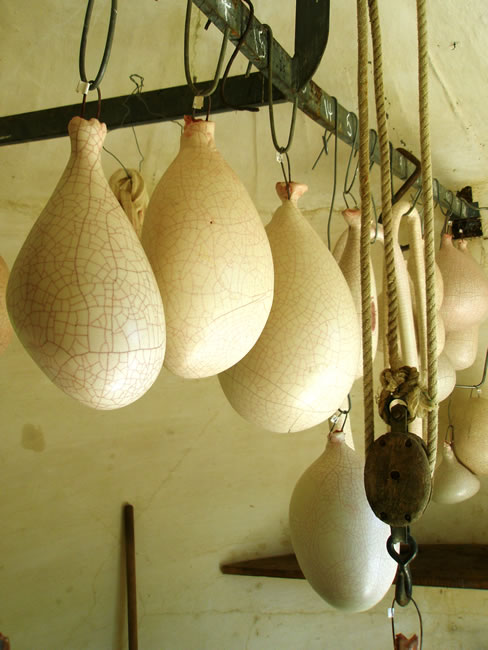 “Sited in the Loudon farm’s slaughterhouse, Cheryl Lucas’ hanging ceramic sculptures appeared as both vessels or containers and the remnants of hanging carcasses - A kitchen larder close to the smell of death and a work rich in narratives:  The land as benefactor to humanity’s needs and a landscape soiled in blood.  It belongs to an iconography of landscape painting that includes Graham Sydney’s Killing House and Colin McCahon’s Seven Days in Nelson and Canterbury, yet it is also distinct from such painterly traditions as a series of beautiful and skilful ceramic objects perfectly integrated within the landscape of Banks Peninsula.”